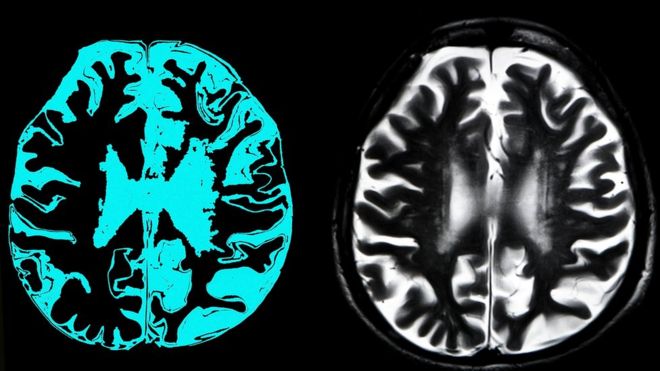 A US drug company says it has created the first therapy that could slow Alzheimer's disease, and it is now ready to bring it to market.

Currently, there are no drugs that can do this - existing ones only help with symptoms.

Biogen says it will soon seek regulatory approval in the US for the "groundbreaking" drug, called aducanumab.

It plans to file the paperwork in early 2020 and has its sights on Europe too.

Approval processes could take a year or two. If successful, the company aims to initially offer the drug to patients previously enrolled in clinical studies of the drug.

The announcement is somewhat surprising because the company had discontinued work on the drug in March 2019, after disappointing trial results.

But the company says a new analysis of a larger dataset of the same studies shows that higher doses of aducanumab can provide a significant benefit to patients with early Alzheimer's, slowing their clinical decline so they preserve more of their memory and every day living skills - things that the disease usually robs.

Aducanumab targets a protein called amyloid that forms abnormal deposits the brains of people with Alzheimer's. Scientists think these plaques are toxic to brain cells and that clearing them using drugs would be a massive advance in dementia treatment, although not a cure.

There haven't been any new dementia drugs in over a decade.

Biogen's chief executive Michel Vounatsos said: "We are hopeful about the prospect of offering patients the first therapy to reduce the clinical decline of Alzheimer's disease."

Hilary Evans from Alzheimer's Research UK said: "People affected by Alzheimer's have waited a long time for a life-changing new treatment and this exciting announcement offers new hope that one could be in sight.

"Taking another look at aducanumab is a positive step for all those who took part in the clinical trials and the worldwide dementia research community. As more data emerges, we hope it will spark global discussions about the next steps for delivering much-needed treatments into people's hands."

Prof Bart De Strooper, Director of the UK Dementia Research Institute at University College London, said: "It is fantastic to hear of these new positive results emerging from the aducanumab trials. We currently have no effective treatments to slow or halt the progression of Alzheimer's disease and I hope this signifies a turning point."

Dementia is not a single disease, but is the name for a group of symptoms that include problems with memory and thinking.

There are lots of different types of dementia and Alzheimer's is said to be the most common and most researched.

There are currently 850,000 people with dementia in the UK.

It's been a long and tortuous journey to find new drugs for the disease and recent attempts have ended in failure.

Experts hope a treatment is in sight, but they are cautious and will need to closely scrutinise these aducanumab trial findings.